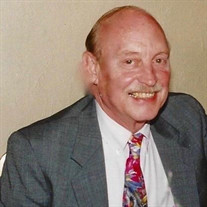 Albert “Al” Ambrose Richardson, Jr, age 93, passed away peacefully in his sleep on November 30, 2020, in Teaneck, New Jersey. He was born on August 16, 1927 to the late Albert and Anna Richardson of Brooklyn, New York. The world has lost a loving husband, father, grandfather and friend. Born and raised in Bay Ridge, Brooklyn he graduated from Fort Hamilton High School and shortly thereafter, was inducted into the United States Army where he served his nation at Fort Monmouth, NJ, Fort Jackson, SC and Fort Belvoir, VA as a Military Draftsman. He was honorably discharged during the post-WWII downsizing of the military, and earned the WWII Victory Medal. He moved to Bergen County where he remained until his passing. Married to his wife, Margaret “Marge” Peters of 53 years, together they raised four amazing children, Kenneth, Daniel, Jennifer and Emily. All happily married, they gave him nine grandchildren, who are loved dearly. Al was employed by Scholastic Magazines for 25 years, first in Englewood Cliffs, NJ and later in New York City, NY, before retiring in 1988. In “retirement” he continued to work at local hardware and department stores. Al’s last employment was with the Girl Scouts of Northern New Jersey. Al was dearly loved for his good humor, his interest in history, reading, art, his love for travel, photography and his kind and positive nature. He was very active in the Boy Scouts of America and responsible for encouraging both sons to attain the top rank of Eagle Scout. He was predeceased by his parents and two sisters, Lillian and Mary. Along with his wife Marge Richardson, Al is survived by his four children, Kenneth and wife Shelly (grandchildren John, Andrew and Eric), Daniel and his wife Kris (grandchildren Willa and Zoe), Jennifer and her husband Tom Rome (grandchildren Caroline, Carson and Colton) and Emily and her husband Dave Standish (grandchild Matilda). He will have a special place in the hearts of many, gone from this world to a better place, but never forgotten. A “Celebration of Life” memorial will be planned at a later date when all of his loved ones can gather safely and travel “home” to New Jersey from New Mexico, Oregon, and Michigan.

The family of Albert A Richardson created this Life Tributes page to make it easy to share your memories.

Send flowers to the Richardson family.