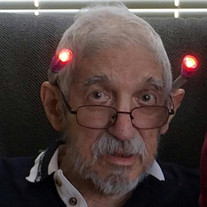 Alfred E. "Rick" Riccardo, 88, died at home in Woodcliff Lake, NJ on July 2, 2016. Survived by wife, H. Carol, five daughters, five sons-in-law, eight grandchildren, his sister, and numerous nieces and nephews and their children, he was known for his quick wit and deep wells of patience. With that boisterous crew, he certainly needed both. Rick was Valedictorian of his High School class, and served in the Army-Air Force "to avoid 8 a.m. classes" and "to live on bases in choice vacation spots." He graduated from Cornell University with a BS in Metallurgical Engineering in 1952, and Seton Hall University Law School in 1978. He decided to attend law school because everyone else in the family was attending or preparing for college then, and "what was one more tuition?" Rick was called out of retirement in 1995 to establish a manufacturing plant for his former employer, Semi-Alloys Corporation, in the Philippines. Upon completing that task, he and Carol traveled throughout Asia. But that was not their first far away destination. At the height of the Cold War, and shortly after the birth of their fifth daughter, they headed to Moscow, USSR for a crystallography conference. Rick served as a member of the Woodcliff Lake Board of Education, and was an active volunteer at the Pascack Historical Society in Park Ridge, NJ. He and Carol shared an intense interest in local history after buying the @1812 Wortendyke House in Woodcliff Lake. They lived there for 33 years, and hosted epic Halloween Pumpkin Carving parties to the delight of everyone who drove by and saw the finished products lined up on the front porch. A memorial service will be held in August. Rick hated to ask for anything, but if you want to make a donation to honor his memory, please consider the Pascack Historical Society, 19 Ridge Avenue, Park Ridge, NJ 07656.

The family of Alfred E Riccardo, Jr. created this Life Tributes page to make it easy to share your memories.

Send flowers to the Riccardo family.