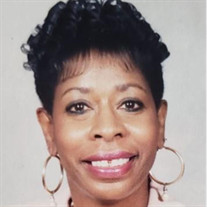 Born in Newark, New Jersey on November 19, 1935, Carolyn Elaine (Corprew) Dunston was the daughter of Vivian Stewart Corprew and Hiawatha (Percy) Corprew. When Carolyn was only 10 years old, her mother passed away and she went to live with her grandmother, Annabelle Smith. On January 22, 1955, she married Charles Dunston and together they had two daughters, Claire Renee, who was born May 11, 1957 and passed away at the tender age of 4, and Kayellen, who was born May 4, 1963. Carolyn was a product of the Newark Public School System. She attended Monmouth Street School and South Side (Malcolm X. Shabazz) High School where she graduated in June 1953. Carolyn, along with her friends Olga Graham and Jean Dupree (deceased), were Drum Majorettes with the Newark Elks Lodge. Wearing their cute orchid and white uniforms, they could be seen marching, performing, and twirling their batons in parades in downtown Newark. Carolyn, along with 7 other girls, was also a member of the Royalettes. After several years, Carolyn’s father decided to remarry and Annie Belle Adkins became her step mother. She shared a close relationship with Annie Belle and even after Carolyn’s father passed, she continued to spend time with Annie Belle at her home in El Paso, Texas. After the dissolution of her marriage, Carolyn moved to East Orange, NJ. She had an impeccable career as an Appeals Officer with the Internal Revenue Service, retiring with honors and awards for her service. Carolyn also made the local newspaper when she dipped her hands in entrepreneurship by being on the team of a startup travel service company in Newark. Carolyn always kept busy helping her community. She spent numerous years volunteering at the Red Cross Disaster Group in East Orange. Carolyn had a beautiful soprano voice and found delight in singing in the choir. Besides being a participant in the choir, during the many years that she was an active member of Calvary-Roseville Church, Carolyn also served as Treasurer, Sunday School Teacher, as well as Arts & Crafts Teacher. Carolyn loved to knit and crochet and enjoyed teaching the young girls in the classes at her church. She was a kind, generous person who would do anything for anyone. Carolyn was very close with her Aunt Ellen (Ellie) Maynard who lived in Washington D.C. She would visit her aunt regularly until Ellie’s retirement and relocation to East Orange. Having Ellie living so close allowed Carolyn to take great care of her aunt for many years until she passed away in 2003. Carolyn also always embraced by her childhood friend Rosebud Jones (deceased) and God-daughter Diana Jones (deceased) and spent a lot of time with them as if they were her own family. Carolyn was elegant and classy. Not only was she a superb singer, she was also an excellent dancer often seen doing the electric slide. She was a fashionable dresser and enjoyed shopping with Kayellen. Carolyn was extremely talented, did calligraphy and loved to decorate for the holidays. In her later years, she was a member of the Brainy Bunch, a program for seniors at the East Orange Senior Center. As her health declined around six years ago, she went to live with her beloved daughter and son-in-law in Fort Lee, New Jersey. They ensured that her every need was met and the closeness the three shared was admirable. She is survived by her daughter Kayellen Dunston-Jefferson and Son-in-Law Isaiah Jefferson, nieces Cassandra Williams, Lillian McDaniels, also cousins, nieces, uncles in the Corprew family, childhood friends Olga Graham and godchild Sheila Graham, other family and very dear friends.

Born in Newark, New Jersey on November 19, 1935, Carolyn Elaine (Corprew) Dunston was the daughter of Vivian Stewart Corprew and Hiawatha (Percy) Corprew. When Carolyn was only 10 years old, her mother passed away and she went to live with... View Obituary & Service Information

Send flowers to the Dunston family.