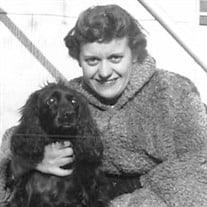 Claire Bonuccelli, 90, a long-term resident of Hasbrouck Hts. passed away peacefully on May 20, 2019. She was born in Jersey City, August 23rd, 1928 to parents Sandy and Arthur Bonuccelli. Claire is survived by her brother, Richard, and sister-in-law Harriett Bonuccelli. She was also the loving aunt of Carla Murasko and Shelley Ancora, and the great-aunt of Samantha, Cara, Laura and Bradley. She will also be missed by her cherished cousins Julie, Jimmy and their families. As a resident of Hasbrouck Hts. and faithful member of Corpus Christi Parish since the mid-1930’s, Claire became an employee of a charter local bank, National Community Bank, two weeks after graduating from the local school system in 1946. She continued on with the bank through its various acquisitions and mergers finally retiring after a 47 year career with the same organization. After retiring, Claire became active with the Hasbrouck Hts. Senior Citizens and Leisure Club, Lodi A.A.R.P. and aided with the annual Jerry Lewis MDA Labor Day Telethon. Claire particularly enjoyed the “Older Is Better” at Felician University, as well as participating in a knitting club, making hats and scarves for cancer patients. In her later years, Claire enjoyed traveling and a number of cruises. In lieu of flowers, donations may be made on Claire's behalf to St. Jude Children's Research Hospital. Visitation will be held on Thurs., May 23 from 4-8PM at Hennessey Heights FH, 232 Kipp Ave. Hasbrouck Hts. NJ. A Funeral Mass will be held at Corpus Christi RCC Fri., May 24 at 10AM. Burial to follow at Holy Cross Cemetery, N. Arlington, NJ.

Claire Bonuccelli, 90, a long-term resident of Hasbrouck Hts. passed away peacefully on May 20, 2019. She was born in Jersey City, August 23rd, 1928 to parents Sandy and Arthur Bonuccelli. Claire is survived by her brother, Richard, and sister-in-law... View Obituary & Service Information

The family of Claire R Bonuccelli created this Life Tributes page to make it easy to share your memories.

Send flowers to the Bonuccelli family.