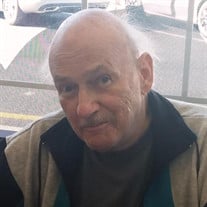 Edward Herbert Sullivan, 73, died Thursday, February 25, 2016, at Villa Marie Claire Residential Hospice, following a long illness. Born November 9, 1942 in Jersey City, NJ, the son of Edward and Josephine Sullivan, and raised in Ridgefield Park, NJ, he resided for the past 20 years in Fort Lee, NJ. An electrician by trade, he was employed by Flex Molding, in Hackensack, until his retirement in 2005. In his later years, he received his Associates Degree from Thomas Edison College, and worked part-time as a tax preparer. He leaves his daughter, Lisa Gentile and her husband, Steve, of Wood Ridge NJ, his son, Ed Sullivan and his wife, Shannon, of Cranford, NJ, and his daughter, Michelle Roth and her husband, Joseph, of Denville, NJ. He also leaves his mother, Josephine and sister, Geraldine Constantinou, both of Chandler, AZ. He is also survived by his loving grandchildren, Jamie, Emily, Ian, Jason, Charley, Paige and Julian and several nieces and nephews. In celebration of his life, a memorial service will be held on Saturday, March 5, from 4-6 p.m at Hennessy Heights Funeral Home in Hasbrouck Heights, NJ. In lieu of flowers, a donation may be made to Interactive Autism Network, a charity dear to him and his family, at iancommunity.org.

The family of Edward H Sullivan created this Life Tributes page to make it easy to share your memories.

Send flowers to the Sullivan family.