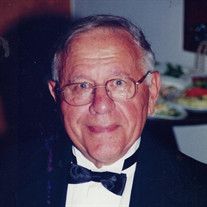 Cerelli, Frank "Hank", 93, of Hasbrouck Heights, formerly of West New York and Oakland, passed away Thursday, May 5. He is survived by his "two sweethearts" - wife Judy (Worsley) of 52 years and daughter, Holly; adored brother, Bill and several beloved nieces and nephews. He is predeceased by his beautiful sister, Joan Swensen. Hank and Judy married and moved to Oakland in 1970, where they resided for 38 years. Hank was a parishoner of Our Lady of Perpetual Help RC Church and taught CCD. He also served on the Oakland Board of Education, was active in Team Tennis and umpired men's softball games. In the 50's and 60's Hank was a member of a successful band called The Joymakers, playing weekends at The Shadows in Fairview, along with many other gigs. Hank loved to sing, and would often entertain at family gatherings and reunions. Hank was a textiles salesman with Monsanto for many years, then began a second career teaching and tutoring math. A proud native of West New York, Hank made lifelong friends at Memorial High School and the Lakewood Social and Athletic Club. He so loved reminiscing, Hank would organize yearly reunions and picnics that drew crowds of well over 100. Their toast to each other was "Here's to Good Friends." And that's what Hank was. Friends and relatives are invited to Hennessey Heights Funeral Home 232 Kipp Avenue Hasbrouck Heights, NJ on Monday May 9th where visitation hours will be from 4:00pm to 8:00pm. The funeral will take place on Tuesday May 10th at Hennessey Heights Funeral home at 9:45am, we will then proceed to Corpus Christi Church Hasbrouck Heights where a funeral mass will be offered at 11:00am. Donations can be made in Hank's name to Bergen County Animal Shelter in Teterboro, or the Ramapo-Bergen Animal Refuge in Oakland.

The family of Frank A Cerelli created this Life Tributes page to make it easy to share your memories.

Send flowers to the Cerelli family.