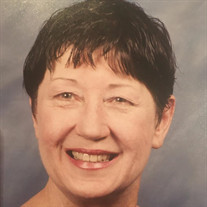 Gayle Swymer Olsen passed away on Tuesday, January 19, 2021 due to complications from stroke and Coronavirus. She was born in Valdosta, Georgia but spent most of her adult life in New York City where she devoted her life to the performing arts. Student, actor, singer, director, teacher, and ultimately conductor, she did it all. She studied at HB (Herbert Berghof) Studio with Uta Hagen, Walt Witcover and Charles Nelson Reilly. She subsequently taught at the same school, for a combined 30 years, while also maintaining her private studio, teaching both voice and musical theater classes. She later taught private singing lessons at Adelphi University as adjunct faculty. Though her performance credits are lengthy, what made her heart sing was conducting. She founded two choirs, while also performing with the Euterpean Choral Ensemble (1973-1991). The first, Die Lorelei, a women’s chorus, was followed by the West Side Singers. They continued for a combined 25 years. She still found time to serve over 20 years as Director of Music at the First Presbyterian Church in Delhi, NY, directing both the choir and handbells and often playing the organ. Always seeking new performance music, she was an avid member of the American Choral Directors Association. Gayle touched countless lives, gifting her students with the love of music, theatre and community in the “Big City.” She was often credited with Xray vision, thanks to her uncanny ability to “see with her ears.” She would listen intently and ask specific questions, slowly guiding students through minor adjustments with major returns. And she always had a box of tissues on the piano for those “special, break-through” moments. But she was more than a teacher. To many she became a mentor, sister, and sometimes mother figure, but most of all, a friend. She bristled with intelligence and a wicked sense of humor that endured to the end. Loved by so many and deeply missed by all she touched, the world has lost a shining star.

Gayle Swymer Olsen passed away on Tuesday, January 19, 2021 due to complications from stroke and Coronavirus. She was born in Valdosta, Georgia but spent most of her adult life in New York City where she devoted her life to the performing arts.... View Obituary & Service Information

The family of Gayle Swymer Olsen created this Life Tributes page to make it easy to share your memories.

Send flowers to the Olsen family.