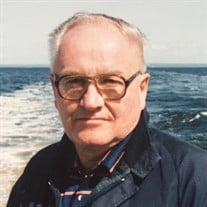 Gilbert A. Hunt passed away on November 27 at his home at Sunrise Senior Living in Basking Ridge, N.J. He was 93 years old. Gil was born on September 30, 1926 in New York, NY. He was the oldest of three boys and grew up in Buffalo, NY. Gil was an avid runner in his youth and, in 1943, he broke the vocational and academic high school cross country record in Buffalo. In the 1944 All-High track meet, he won the mile run to end the season undefeated in that event. He served in the U.S. Navy as a Pharmacist’s Mate, 3rd Class, from 1945-1946. He attended Michigan State University and was part of the 1948 cross country championship team that won NCAA, ICAA and National Senior AAU titles. After graduating MSU, Gil lived and worked in Reno, Nevada, followed by New York City. In 1957, Gil married Arlene Hull. Together they built a loving home in Hasbrouck Heights, where they were both active members of the community. Gil was a member of the Hasbrouck Heights Board of Education from 1975 through 1990, serving twice as president. He also served on the Planning Board and was a member of the American Legion. He was a member and past master of Euclid Lodge F&AM, where he also served as lodge secretary. Gil was particularly proud of his involvement with the Hasbrouck Heights 32nd Degree Masonic Learning Center for Dyslexic Children, where he served as Chair of the Board of Governors from 2007 through 2010. He was also a confessing member of the First Reformed Church of Hasbrouck Heights, serving as Deacon, Elder, and Vice President of the Consistory. For almost forty years, Gil worked in pharmaceutical sales for William H. Rorer, where he was elected into the company Hall of Fame. Predeceased by his wife, Arlene, Gil will be greatly missed by his daughter, Susan Kennedy of Basking Ridge, NJ, his son-in-law, Rich, and his grandchildren, Matt and Emma, as well as his two brothers, Will and Dayton Hunt, and their families. Gil would appreciate his many friends and Masonic brothers raising a glass of single malt scotch in his memory. Funeral service will be on Saturday, December 7th at the First Reformed Church of Hasbrouck Heights at 10am. All to meet at church. Interment to follow at Crest Haven Memorial Park in Clifton. Visitation at the Hennessey Heights Funeral Home, 232 Kipp Ave, Hasbrouck Heights on Friday from 3:30pm-7:30pm. In lieu of flowers, contributions to the First Reformed Church of Hasbrouck Heights, in Gil’s memory, are appreciated.

Gilbert A. Hunt passed away on November 27 at his home at Sunrise Senior Living in Basking Ridge, N.J. He was 93 years old. Gil was born on September 30, 1926 in New York, NY. He was the oldest of three boys and grew up in Buffalo, NY. Gil... View Obituary & Service Information

The family of Gilbert A Hunt created this Life Tributes page to make it easy to share your memories.

Gilbert A. Hunt passed away on November 27 at his home at Sunrise...

Send flowers to the Hunt family.