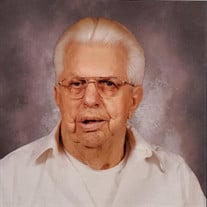 RIP Harlen (John) Sandard Arbaugh September 14, 1936 - June 5, 2020 On this Day, June 5, 2020, Harlen Sandard Arbaugh passed peacefully from this life into his eternal heavenly rest. Harlen, also known as John by his NJ family, and Sandard by his West Virginia family, was battling cancer for the second time. Although he was a tough guy, which everyone knew he was, he gave it his very best fight, but it just wasn’t enough this time around. He was a very special man with a big heart and a cowboy attitude. He lived a long life despite the many life threatening moments along the way. He was loved by many and even though he had a quiet unassuming presence he was a force to be reckoned with. I called him a spitfire right to the end! My heart is hurting for I will miss his presence and his southern drawl, that over time actually started to rub off on me and my kids. My sons Antonio and Giovanni were his world and he taught them many things. He was always there when they needed anything. He was their GPJ (Grandpa John) and they loved him dearly. He was my husband’s back-up when it was me against all the boys in my house. My husband Steve and my father John had a great respect for each other and they had an underlying connection because of it. My father was my little handyman who pretty much could build or fix anything and he loved doing it. He was proud of all the things he did on the beautiful place we call home. It will be a weird feeling to not see him shuffling around the yard and neighborhood. He loved his lottery tickets, his cowboy movies, “Feeshing”, putting the thermostat up to 80, his job, his friends and neighbors, his God and he loved his family most of all. Even my cat Cody will miss sneaking onto his chair when he got up or cuddling up on his legs and my dog Maxx will surely miss the giant hunks of bologna he would sneak him when I wasn’t looking. John was born in Elkins, West Virginia and traveled around working here and there, in many different states, doing odd jobs until he ended up on Elizabeth Street in Paterson, NJ. He did carpentry for most of his life and his last job he worked was for St. James Church and School in Totowa, NJ (Diocese of Paterson). He was so dedicated to his job that he would get there before his shift even started. He rose early 5:00AM every morning like clockwork, grabbed his little lunchbox, and off to work he went. The kids and staff at the school loved him and he took his job very seriously. John, or Sandard as his family called him, had an enormous family in West Virginia, consisting of his loving mother Ella Davis Strawder, his father Delbert Strawder (both predeceased), and his 9 siblings. His brothers Marvin, Delbert, Larry (predeceased), and Elwood and his sisters Retha, Linda, Mae, Darlene and Danna. There are many nieces, nephews, and cousins.. too many to list! Every summer he would drive down to spend a family reunion there and he did that right up 'til this past summer. I know they will miss him, but we will honor his wishes to be buried in his family cemetery so he will never miss a family reunion ever again. Lastly, John and my mother Anne spent many years as a loving couple. They started out friends and then became companions. They had a positive effect on each other. John needed a person who was nurturing and Anne needed a person who was strong and helpful. It was a good union and lasted many years, they had great times. She could get him to do just about anything, including flying on a plane (his biggest fear) and to go onto wonderful adventures throughout their lives. Now he is flying one more time to reach his final resting place in Glady, WV. About 5 days before he passed, as I woke early and made him his morning eggs (no hard ends and 1 slice of wonder bread with a ton of butter), he looked up at me and said “you look like an angel”, I laughed and my heart was touched but I had a sense it was going to be a last memory that I would have and it was, but now John, you will truly be flying… Flying with the angels!!!

The family of Harlen Sandard Arbaugh created this Life Tributes page to make it easy to share your memories.

Send flowers to the Arbaugh family.