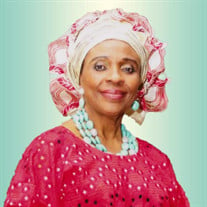 Iboro Udo Edemeka was born in a small town in southeastern Nigeria in 1950 to loving parents, the eighth of ten children. As a premature infant, her survival was in question; however her strength and her parents' faith in the Lord that created her ensured her survival. Iboro means "God answers prayer" and she went on to live a life that honored her parents and her Heavenly Father, in whom she held the most steadfast faith. Iboro grew up in a household where men and women were viewed as equals, with boys and girls doing the same household chores — a highly progressive approach in that culture and at that time. Empowered by her father's pride and the example set by her hardworking mother, Iboro became determined to travel to America and become a scientist. At school, her high ambitions were mocked by many of her peers, but Iboro’s intelligence and determination caught the attention of someone special—her future husband, Udo Edemeka. After courtship and marriage, the two set out to the United States, with minimal financial means but rich in faith and determination, to create a life together. Iboro supported her husband's journey in becoming a doctor, as well as the seven children they would eventually have. Despite the enormous responsibilities she undertook as a wife and mother, Iboro never lost sight of her dreams. While rearing her children, she began to study pharmacy. With her fierce intelligence and resolve she earned her degree in pharmacy and became a pharmacist. Iboro later opened up her own pharmacy, bringing much-needed care to an under-served community for several years. She would come to feel honored the bonds she formed with many of her clients, whose trust in her grew to extend beyond prescriptions, into sharing the ups and downs of their personal lives. Iboro advocated tirelessly for her children, her husband, and her people. Regarding her family, she stopped at nothing in order to secure the best opportunities for her children and ever-vigilant about the welfare of her husband and children. As a pharmacist, she was an active member of her chamber of commerce, further enriching her community. As a Nigerian, she was a founding member of the National Democratic Party, seeking to empower every citizen. Iboro loved flowers and they embodied her nurturing and creative spirit. While busy tending to her garden, fashioning decorations for cakes, or adorning herself in a floral print or perfume, she enveloped herself in natural beauty. She often made arrangements from cuttings in her garden, filling her home with the color and scent of her pride and joy. Another source of pride that filled her home was her cooking. The sumptuous aroma of delicious food routinely wafted through every room. No efforts were spared in securing the ingredients she required and everyone she fed reaped the rewards of her exacting standards. The meals she prepared punctuated every occasion. In particular, her egusi soup, coconut rice, chin-chin, and her bean stew will never be matched. Throughout her life, Iboro touched so many lives through her countless displays — both small and grand — of kindness, compassion, generosity, and love. Perhaps one of Iboro’s greatest legacies will be the wisdom she imparted to all of her children about the paramount importance of family. During her childhood, Iboro saw firsthand how a strong family working together could persevere through tremendous hardship, including surviving a deadly civil war in Nigeria that forced her and her family to escape famine by temporarily relocating to a neighboring country with incredibly limited means. Iboro firmly believed that “a family is forever” and by maintaining strong bonds between family members, along with faith in Christ, any obstacle can be overcome. Iboro made sure to impress the foremost importance of family upon all of her children at an early age and never stopped repeating those teachings even as her children grew into adults. Those teachings continue to resonate today, more than ever, and the way her children look after each other and their father serves as a testament to Iboro’s wisdom and her boundless nurturing spirit. Iboro regrettably passed on Friday April 24, 2020, joining a daughter, her mother and father, a sister, and two brothers. Her story lives on in the hearts of her loving husband, six children, four brothers, two sisters, all her nieces and nephews, and those who held her dear. In lieu of flowers, donations can be made to charities that promote the empowerment of young Black women such as Black Girls CODE and Gyrl Wonder. A celebration of Iboro’s life open to family and friends will be held at a future date when it is safe to do so.

Iboro Udo Edemeka was born in a small town in southeastern Nigeria in 1950 to loving parents, the eighth of ten children. As a premature infant, her survival was in question; however her strength and her parents' faith in the Lord that created... View Obituary & Service Information

The family of Iboro Udo Edemeka created this Life Tributes page to make it easy to share your memories.

Iboro Udo Edemeka was born in a small town in southeastern Nigeria...

Send flowers to the Edemeka family.