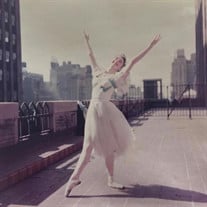 Janice Estelle Painchaud Herbert (1932–2021) Janice Estelle Painchaud Herbert, 89, passed away on December 18, 2021 at the Actors Fund Home in Englewood, New Jersey. Janice was a loving daughter, sister, wife, mother, grandmother, great-grandmother, and friend. Born in Biddeford, Maine, on August 8, 1932, Janice was the daughter of Armand Louis Painchaud and Evelyn Beatrice Painchaud (née Villandry). She grew up attending Catholic school in Biddeford. As a teenager, she competed in and won the Miss Personality New England pageant. During this time, she began to study dance with a visiting instructor named Vladimir Kostenko, who taught once per week in nearby Portland. Janice’s natural artistry and dancing skills were abundantly evident; when she turned eighteen, she moved to San Francisco to continue working with Kostenko at the Studio of Ballet Art. After her time on the West Coast, Janice moved to New York City, where she danced for three years in the Radio City Music Hall Corps de Ballet from 1953 to 1956. The fast-paced and demanding work with this company, not to be confused with the Rockettes, was one of the formative experiences of Janice’s career. The Corps worked multiple shows per day, 365 days per year. The concrete stage was dangerous, and the pace was intense. As Janice explained during her years of advocacy for the Corps’ legacy, “the ballet got the blisters, the Rockettes got the glory!” After Radio City, Janice worked for years in musical theatre, both on Broadway and on tour. An invaluable ensemble member and swing understudy, Janice would work for months or years on one show. They include Most Happy Fella (1956–57), Take Me Along (1959–1960), The Happiest Girl in the World (1961), and Hello, Dolly! (1964–1970). Janice explained that her most memorable moment in the theater was during Take Me Along. She said that, “Walter Pidgeon, co-starring with Jackie Gleason, chose me as his waltzing partner which we did behind the opening curtain. It was beyond my wildest dreams to be in the arms of this handsome leading man and me being only a little chorus girl.” It was during her time working in the theatre that she met her husband, Leo F. Herbert, Jr. The couple had a daughter, Heather. After Hello, Dolly! Janice devoted more time to her family, and they moved to Glen Ridge, New Jersey. During this time, she worked in television, doing extra work or smaller roles on the soap opera One Life to Live. In 1982, Leo and Janice moved back to New York City, and into Manhattan Plaza, a nexus for performing artists. She became involved with the organization Dancers Over 40, which honored her with a lifetime achievement award in 2015. She was a regular volunteer for the Police Athletic League, and she also was active as a seamstress. In 1990, Janice earned an Emmy Award for her work on the Big Bird and Mr. Snuffalupagus costumes for Sesame Street. Janice continued to attend dance classes until her 60s, and could frequently be found chair dancing after that, most often to the music of Al Jolson, Michael Feinstein, and Golden-Age Broadway albums. Janice is survived by her daughter, Heather Mays, her son-in-law, Mark, her brother Gerald, her step-children, Lynn, Cheri, Liam, and Heidi, her grandchildren, Daniel, Kenneth, Adam, Noah, Lucas, Laura, Christopher, and Sophie, and great-grandchildren Angela, Henry, Silas, and Felix. She is predeceased by her husband Leo F. Herbert, Jr., who passed away in 1993. She is also predeceased by her parents, Armand and Evelyn, her brother, Roger, and her step-son, Kim. The family will hold a private celebration of life during 2022. In lieu of flowers, please consider making a donation to Dancers Over 40 in Janice’s memory: https://dancersover40.org/join.shtml.

In lieu of flowers, please consider making a donation to Dancers Over 40 in Janice’s memory: https://dancersover40.org/join.shtml.