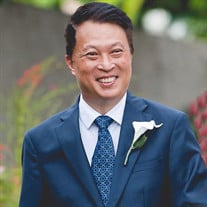 Dr. Leon K. Liem passed away peacefully in his sleep surrounded by loved ones on June 28, 2021 after a hard-fought battle with non-hodgkin’s lymphoma. Leon was born in 1964 in Bandung, Indonesia, to Dr. Chris and Julie Liem. Leon immigrated with his parents and two sisters to New Jersey at the age of 4. He studied electrical engineering at MIT and earned his MD at Albert Einstein College of Medicine. He followed in the footsteps of his father, a neurologist, and became a neurosurgeon, completing his residency at University of Maryland. His love of learning later drove him to earn his MBA from George Washington University. Following his medical training, Leon served his country in the armed forces as a neurosurgeon in the US Army. In 1996, his service brought him to Tripler Hospital in Honolulu, and Hawaii became his home for the rest of his life. He opened up a private practice and operated on patients across the islands for over 20 years. He valued his work over everything and is remembered by his colleagues and patients as a gifted, compassionate and caring physician who was a lifeline for so many. Leon had a bright and energetic personality and loved life fiercely. He had an uncanny ability to connect with people in a deep and positive way and treated everyone as if they were family. He loved bringing friends together and touched many lives with his generosity and passion for life. While he was known to his friends for his sharp wit and often being the smartest person in the room, he was also the biggest goofball, always being quick to laugh at himself. His free spirit and zest for experiencing life carried him to seek adventure at every opportunity, frequently traveling to new places, experiencing concerts and music festivals, attending sporting events and bringing along others for the journey. Win or lose, Leon was a lifelong fan of the New York Mets and Miami Dolphins. Leon is also remembered by his many talents. He was a skilled and intuitive musician who taught himself to play the piano, guitar, harmonica, flute, and saxophone without any formal lessons. Many admired his ability to pick up any instrument and learn to play it well. He was an irreplaceable member of his band “The Pebbleworkers.” As with music, he welcomed any challenge, oftentimes taking on difficult projects just for the sake of learning something new. As a kid, he took great pleasure in taking apart and re-constructing his computers. Leon is survived by his daughter Stephanie, son Alex, girlfriend Van Huynh, sisters Lisa Lau and Janet (John) Adams, and loving extended family and friends. He will be dearly missed by many. A private service will be held in Westfield, NJ on Saturday July 10th, and a celebration of life will be held by invitation on Saturday, July 24th in Honolulu, HI. Please email [email protected] if you would like additional details. Leon’s family requests that no flowers be sent. For those who wish, donations in memory of Leon may be made to the Lymphoma Society at Memorial Sloan Kettering Cancer Center. Online donations may be made using the following link: http://mskcc.convio.net/goto/Leon. Checks, made payable to Memorial Sloan Kettering Cancer Center, should be mailed to: Attn: Community Fundraising, Memorial Sloan Kettering Cancer Center, Office of Development, PO Box 27106, New York, NY 10087. Please indicate on the check memo line that the gift is in memory of Leon Liem.

Dr. Leon K. Liem passed away peacefully in his sleep surrounded by loved ones on June 28, 2021 after a hard-fought battle with non-hodgkin&#8217;s lymphoma. Leon was born in 1964 in Bandung, Indonesia, to Dr. Chris and Julie Liem. Leon immigrated... View Obituary & Service Information

The family of Dr. Leon Liem created this Life Tributes page to make it easy to share your memories.

Send flowers to the Liem family.