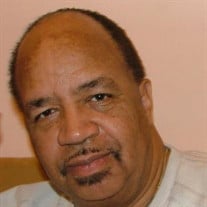 Louis E. Dargin, Sr. passed away Friday, October 9, 2015 in Hasbrouck Heights, New Jersey after battling cancer for more than a year. Louis was born the first child of Leomi (Head) Dargin and the late Louis Wesley Dargin on February 20, 1942 in Detroit, Michigan. Louis and his 10 younger siblings were encouraged by their parents to strive for success in whatever they endeavored, and he proved to be an industrious and smart child. He attended public schools in Detroit, including Higginbotham Elementary School, Franklin Jr. High School, and Western and Northwestern High Schools. After graduating from high school in 1961, Louis enrolled in the U.S. Air Force and served at bases in the United States and in Turkey. While he was at stationed at a base near Denver, Colorado, Louis met and married Eva Marie Gertge. He was honorably discharged from the Air Force in 1965, the same year his daughter, Ingrid, was born. In 1967 the family moved to Detroit, where Louis became involved in social and political organizations and began working for the State of Michigan as a Construction Field Clerk with the Department of Transportation, and his daughter Mona was born. In 1970 Louis began working at the Michigan Department of Health & Human Services (MDHHS) as a Case Worker, and soon after he married Mamie Alice Mitchell. While the size of his family increased with the additions of son Louis, Jr., daughter Marla and son Mark, Louis began attending college at Wayne State University and interning as a counselor at the Vista Maria runaway shelter. After graduating with a Bachelor’s degree in Social Work, he was offered a scholarship to the University of Michigan’s top-ranked School of Social Work. His example reinforced the value of higher education that he had verbally instilled in all his children, all of whom went on to earn college degrees of their own. However, he turned down the award after he was promoted to Section Manager with MDHHS in 1981. Louis, known for his wisdom, compassion and fairness, remained employed with the State of Michigan for a total of 30 years before retiring in 1997. He enjoyed pursuing hobbies such as boating, fishing, Chinese brush painting, Sumi-E (ink wash painting), and spending time with his family during this well-deserved retirement. In 2005 Louis moved to New Jersey, married Ludivica Salera, and became stepfather to her children, Lindy, John Evan, Jo Anne, and Kristie Mae. Louis spent his remaining years cooking, practicing his art, traveling with Ludy around the U.S. and internationally, and visiting his ever-growing family. Preceding Louis in death are his father, Louis Wesley Dargin, and his brother, Keith Dargin. Louis is survived by: his wife, Ludivica Salera; his mother, Leomi Dargin; siblings Cedric (Peggy) Dargin, Errol Dargin, Reginald (Anne) Dargin, Lesley Dargin, Cecil Dargin, Yvette (Vincent) Wells, Philbert (Renee) Dargin, Andrea Dargin, and Erick Dargin; his children, Ingrid (Marvin) Anderson, Mona (Kenton) Williams, Louis (Donalyn) Dargin, Jr., Marla (Devlin) Williams, Mark (Tanjie) Dargin; his step-children Lindy Salera, John Evan Salera, Jo-Anne Salera, and Kristie Mae Salera; his grandchildren: Cole, Xavier, Devlin, Jr., Gabrielle, Kennedy, Mark, Jr., and Mikayla; and his step-grandchild, Eriel; and a host of loving aunts, uncles, nieces, nephews, cousins and in-laws.

The family of Louis E. Dargin created this Life Tributes page to make it easy to share your memories.

Send flowers to the Dargin family.