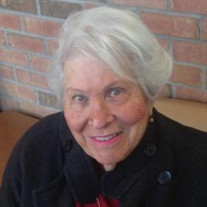 LUCILLE GERBER KING, a longtime Stamford resident, died peacefully on November 1, 2021, at the Lillian Booth Actors Home in Englewood, NJ. She was 91. She was a devoted and loving mother, wife, aunt and grandmother and was a generous and thoughtful mentor to many friends, students and colleagues in her community who were attracted to her inspirational and magnetic personality. Mrs. King was born in the Bronx, New York City on July 15, 1930, and grew up on Mayflower Avenue in Stamford. A graduate of Stamford High School, she went on to become an actress, producer, director and teacher of theater and dance for more than five decades. Her first professional venture was to found and direct a successful children’s school of dance in Washington, DC. She attended the College of William and Mary in Williamsburg, VA where she received her BA degree in 1951 and met her future husband, Ronald King, then an aspiring actor, singer and composer. Mr. King, who went on to become a prominent real estate attorney in Stamford for more than forty years, was her biggest fan and often quipped that she did the “openings” and he did the “closings.” While raising a family, she co-founded American Musical Theater, bringing many professional productions to Stamford in the 1960s, including “West Side Story,” “Finian’s Rainbow,” “Carousel,” “My Fair Lady” and “Damn Yankees.” She was also active in supporting many local performing arts organizations, including Ballet Etudes in Norwalk, the Norwalk Theater and the Ethel Kweskin Barn Theater at Sterling Farms. She worked closely with Gene Feist, founder of New York’s off-Broadway Roundabout Theater Company, assisting him in launching and nurturing what is now a leading and award-winning Broadway theater company. She appeared in many productions over the years as part of their repertory company and directed the premier of “Checkmate” by Evan Hunter at that same theater. She was a trailblazer in opening educational doors for others by being one of the first Jewish parents to gain admission for her children to New Canaan Country School. The school, long considered one of the best secondary schools in America, subsequently became a leader in promoting opportunity, diversity, tolerance and inclusion for all members of society. An ardent proponent of social justice throughout her life, most notably she actively engaged in the Civil Rights movement, was an early participant in the Feminist wave of the 60s, advocated strongly for passage of the Equal Rights Amendment (ERA) in the 70s, and protested Reagan era “silence” during the AIDS epidemic in the 80s. She wrote and produced a musical revue about the life of legendary entertainer Sophie Tucker called “I’m Livin’ Alone And I Like It,” which ran at New York’s Horn of Plenty cabaret theater and at the Kweskin Barn Theater in Stamford as well. She performed in a New York production of “Flo’s Boathouse.” She also directed and co-produced “Behind The Heart,” a well-received adaptation of the stories of Djuna Barnes at the Ohio Theater in New York. She appeared on national television in the soap opera, “Ryan’s Hope,” and in a David Susskind production, “Johnny, We Hardly Knew Ye.” During her career, she worked with many prominent musical artists including jazz pianist John Mehegan and pianist-composer John Wallowitch. She earned a Masters Degree in Education at the College of New Rochelle (CNR) and became a gifted and inspirational teacher of English as a Second Language at CNR and at The University of Connecticut, Norwalk Community College, New York University and elsewhere. She was predeceased by her parents Isidore “Peter” Gerber and Pearl Nyary Gerber and by her husband, Ronald King. She is survived by her sons, Lawrence Scott King and Peter Allen King, sister Sandra Gerber Levine, brother-in-law Jay Levine, son-in law Daniel Stone, daughter-in-law Leah Brandon, grandchildren David Alexander King, Cassidy Elizabeth Tierney and Austen Danielle Bohmer, and nephews Michael Levine and James Levine. A graveside service and burial are planned for Sunday, January 9, 2022, at 12:30PM at the Independent Hebrew Cemetery, 143 Richards Avenue in Norwalk followed by a private memorial reception for family and friends. In lieu of flowers, the family requests memorial donations in the name of Lucille G. King to be made to The Actors Fund Home, 155-175 West Hudson Avenue, Englewood, NJ 07631 ATTN: Jordan Strohl.

LUCILLE GERBER KING, a longtime Stamford resident, died peacefully on November 1, 2021, at the Lillian Booth Actors Home in Englewood, NJ. She was 91. She was a devoted and loving mother, wife, aunt and grandmother and was a generous and thoughtful... View Obituary & Service Information

IN LIEU OF FLOWERS, THE FAMILY REQUESTS MEMORIAL DONATIONS TO BE MADE TO THE ACTORS FUND HOME, ENGLEWOOD, NJ ATTN: JORDAN STROHL

Send flowers to the King family.