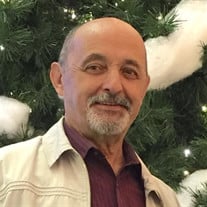 Manuel Ramon Ageitos Pinazas, “Moncho O Sastre”, born in Galicia, Spain, he emigrated to the United States in 1985 and made his life in Kearny, NJ. Manuel, 71, passed away on Tuesday, Aug. 27, 2019 in Morristown, N.J., after a long battle with Mesothelioma. Manuel was born Dec 7, 1947 in Santiago de Compostela, Galicia, Spain, and grew up in Palmeira. He went to school in Barcelona to become a tailor. In 1971 he married María in Ribeira and started his career there as a tailor. In 1985, Manuel moved with his family to the United States and settled in Harrison, NJ, where his children attended school, he later bought a home in Kearny, NJ. Manuel worked in construction in New York at the Brooklyn Navy Shipyard for several years, and also in construction projects throughout New York. For a few years before his illness, he worked as a handyman at Park Vendome in New York City. Manuel enjoyed many things in life, but he enjoyed most of all the time spent with his wife, children, and grandchildren. Wherever he was, there was happiness. He was a devoted husband to his surviving wife, Maria D. Cespon Martínez, and loving father to Juan and Divina. There was no greater joy to Manuel than to be surrounded by his grandchildren, Giulia, Diego, and Natalia Arpino, and to make his annual trip to Spain to spend time with his family and friends back home. Aside from his wife, children, and grandchildren, he is survived by his sister, Manolita, and his brother Juan of Palmeira and their children and grandchildren. Honoring his wishes, funeral services will be held In Palmeira, and he will be buried in Ribeira, Galicia, Spain . A private viewing for his family will be held at Hennessey Heights Funeral Home, Hasbrouck Heights, NJ, before he travels to his final resting place.

The family of Manuel Ramon Ageitos Pinazas created this Life Tributes page to make it easy to share your memories.