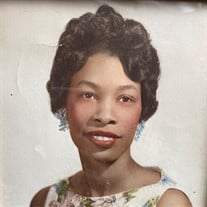 Maxine R. McNeil was born in Union County, North Carolina on August 31, 1932 and passed away the rainy morning of April 30th, 2020. Born to Lester and Bertha Alsobrooks-Richardson, she was the eldest daughter and third of the ten children. Maxine attended High School in Union County, North Carolina where she was on the basketball team and then continued on to higher learning at Livingstone College where she pledged Delta Sigma Theta. Maxine then found employment at the Office of Personnel Management in Washington D.C. where she worked as a procurement officer for the federal government for over 30 years. Mrs. McNeil was known as “Mack” and “Big Mac” to friends and family. She was dedicated to her family. When someone was in need, Maxine was never far behind. She cared for both parents and spouse (Roosevelt) in the transitioning years before they passed. Maxine raised a daughter Apryl, who she supported in becoming a medical doctor. When Apryl started her own family with her husband Dr. Absylom Nyamekye she became the primary caretaker for the grandchildren Yasmin and Jaja, whom she cherished with all of her heart and soul. Maxine adored shopping, fashion, Tyler Perry productions, Oprah, pop culture, CNN, cooking, baking, entertaining and was dedicated to her family. Max was an avid conversationist and could easily speak to anyone. She was extremely enduring, charismatic and left a lasting impression on anyone she encountered. Maxine was loving and would give time and energy in whatever way was necessary to be successful. She leaves, to cherish her memory, daughter Apryl (Absylom), grandchildren: Yasmin and Jaja, siblings: Lester H. Richardson, Napoleon (Lily) Richardson, George (Bertha) Richardson, Lorenzo (Diane) Richardson, Roger Richardson, Dr. Parthenia Richardson; In-laws: Margret Richardson, Maxine Richardson and a host of nieces, nephews and cousins, childhood friend Elgiva White and close family friend Varian Wright. She will be joining her parents, spouse, brothers: Wade Richardson, Osborne Richardson, Hintson Richardson and sister-in-law Shirley Richardson. A celebration of Maxine’s life will be held at a future date when it is safe to do so.

Maxine R. McNeil was born in Union County, North Carolina on August 31, 1932 and passed away the rainy morning of April 30th, 2020. Born to Lester and Bertha Alsobrooks-Richardson, she was the eldest daughter and third of the ten children.... View Obituary & Service Information

The family of Maxine Richardson McNeil created this Life Tributes page to make it easy to share your memories.

Send flowers to the McNeil family.