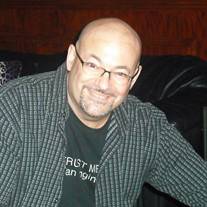 Robert was born September 16, 1957 in Philadelphia, PA, the third of 4 children in a musical and artistic family. After seven years in Massachusetts, Robert’s family moved to Livingston NJ, where he graduated from Livingston High School. Robert had featured or lead roles in all theater and musical productions at LHS, as well as lead roles in productions staged by Groundling Theater, a non-equity theater company. After graduation, Robert focused on his musical career, becoming a sought-after performer across the northeast. One online bio stated, “There's only ONE Robert Pollack... A veritable 'toolbox' when it comes to stage, studio, technology and general 'aural acumen'”. With his soulful, versatile keyboards and vocals, Robert collaborated on hundreds of sessions over 3 decades, including jingles, radio voiceovers and corporate projects. Rob's credits list includes Time Warner, AT&T, Viacom, Lucent, Nickelodeon, Showtime, WABC and MTV to name a few. Rob was also a producer as well as partner in his own audio-production facility "Satellite Studios" in New York City. Rob performed, arranged, and produced for the SONY-affiliated DK Studios in Manhattan, providing vocals for widely heard Karaoke. At bars and parties everywhere, revelers were singing along with Robert. As a solo or ensemble act, Rob was heard regularly at Trump Castle, Claridge Casino and Caesar's in A.C, and at Top Of The Sixes, The Doral Park Avenue Hotel, Elaine's and One If By Land, Two If By Sea in NYC. In January 2006, Robert opened a new chapter, becoming part of the team opening the Apple Store at Garden State Plaza Mall in Paramus NJ. He brought his music industry MAC expertise to his role as a Creative, providing customer training on any Apple device. Robert took this to new levels with his knowledge, patience and guidance. His value was recognized with multiple performance awards. He earned the respect of his coworkers, and enjoyed many new friendships that endured after he was forced to leave Apple in 2013 due to illness. Robert is survived by family, friends, fellow musicians, and by all those he touched with his singular intelligence, warmth and talent. To understand more about the blood cancer that Robert suffered from, or to make a donation in his memory in lieu of flowers, please visit the Multiple Myeloma Research Foundation website: https://themmrf.org/ Condolences at Michael and Denise Pollack’s Residence 119 Ridge Drive Montville, NJ 07045 Thursday, September 13 2:00 – 5:00 PM 7:30 – 9:00 PM Friday, September 14 2:00 – 6:00 PM

Robert was born September 16, 1957 in Philadelphia, PA, the third of 4 children in a musical and artistic family. After seven years in Massachusetts, Robert&#8217;s family moved to Livingston NJ, where he graduated from Livingston High School.... View Obituary & Service Information

The family of Robert Pollack created this Life Tributes page to make it easy to share your memories.

Send flowers to the Pollack family.