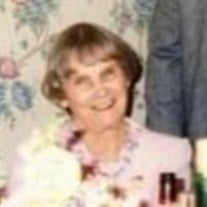 Rosemary Loretta Andes, of Lodi, passed away on Friday, May 21, 2021, surrounded by her loving family. She was born March 6, 1929, in the Parsons section of Wilkes-Barre, a daughter of George and Loretta Cusick Sink. She attended the local schools and graduated from Coughlin High School, class of 1947. She was employed by Planter's Peanuts. She met her husband, John Francis "Jack" Andes in Wilkes-Barre, Pennsylvania. The childhood sweethearts married in 1952 and relocated to Virginia during his service in the United States Navy with their beloved poodle and parakeet. They then relocated to Lodi, New Jersey, where Jack's brother resided. Rosemary's greatest devotion was to her family and her faith. She was an avid reader and student of child-rearing and history. She remained true to her interests in cinema and music and became a very loyal Rutgers Football and New York Jets fan. In Lodi, they raised their children together until his passing in 2001. Rosemary was a very hands-on mother, singing nursery rhymes, soothing booboos, putting band-aids on cuts, patches on pants, sewing awards on Scout uniforms, handmaking Halloween costumes, decorating for all the holidays, setting up arts and crafts projects after school, attending school functions and games, cyo functions, church functions, and reading with her children. She filled their home with Easy Readers, fairy tale classics, the Hardy Boys series, Encyclopedia Americana, the Presidents' series, literature classics, and the complete Peanuts Illustrated collection of Charles Schultz, as well as children's magazines and sports magazines and baseball yearbooks. She threw many birthday parties with her husband for her young children, travelled with them to family and on vacations and greatly enjoyed scrapbooking details of their family gatherings, vacations, and sports and school functions, writing on the back of each picture. There are countless happy memories her children and grandchildren have of growing up, especially unwrapping a voluminous number of gifts on Christmas, birthdays, and a birthday cake with candles and her singing praises and accomplishments on each birthday of her children. She would make surprise appearances after school on her children's paper routes with her husband. She shopped in the stores where her children worked as teenagers and in their twenties. She went trick or treating with her grandchildren, and to dinners, played board games with them, and took train rides through the hills and down to New Brunswick for ice cream, as well as amusement parks and parks. She wrote many letters to her children whenever she couldn't reach them in a dormitory or off-campus housing and sent cards on the holidays. She was a member of St. Francis de Sales and Corpus Christi Parishes. In later life, she relished talking on the phone to her family and friends from Wilkes-Barre and Virginia, for many hours, while residing in Hackensack. Rosemary was a daughter, sister, niece, wife, cousin, aunt, grandmother, great grandmother, friend, fashionable dresser, but first and foremost, she was a mother to her children, and they will miss her very much. She is survived by her children: John Andes, of Burlington, VT, Joseph Andes and his wife Susan Andes, of Newberry, FL, Robert Andes, of Cliffside Park, NJ, and Thomas Andes, of Hackensack, NJ, grandchildren Shawn Andes and his wife Gillian, Zachary Andes and his wife Summer, and Matthew Andes, and great-grandchildren Lola and Piper.

Rosemary Loretta Andes, of Lodi, passed away on Friday, May 21, 2021, surrounded by her loving family. She was born March 6, 1929, in the Parsons section of Wilkes-Barre, a daughter of George and Loretta Cusick Sink. She attended the local schools... View Obituary & Service Information

The family of Rosemary L Andes created this Life Tributes page to make it easy to share your memories.

Rosemary Loretta Andes, of Lodi, passed away on Friday, May 21,...

Send flowers to the Andes family.