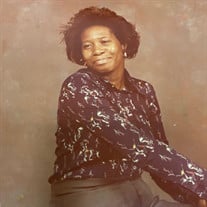 Vera Mae Hardaway was the first-born daughter, of the four daughters, Norma Watkins gave birth to. She was born in Manhattan, NY on November 13, 1955. March 26, 2022, was the chosen day in which our beloved Vera Mae Hardaway, earned her wings and the keys to the Kingdom. She left her physical, earthly body and fully became a part of the spiritual world. Over 50 years ago, the most high chose Vera to become the mother of her first-born child, Theresa, by way of Thomas Carlton. Then a good eleven years later, she was chosen again, to be the mother of her son Raymond, by way of Julius Patterson. Her children continue to be two of her greatest accomplishments in life. One of her greatest professional accomplishments in life, was her 34 years of excellence in various positions, within the mail department at several JP Morgan Chase Banks. In addition, at least the last 22 + years, while some of us were grateful for a snow day, this earth angel, that she was, religiously got up at about 5am, to get to work in Jersey City by 7am. She often was the only employee to regularly make it into work. That was some serious dedication. Raymond and I always admired our mother’s work ethic, and we have both emulated it, for most of our lives, since we started working, respectively at 13 and 14 years of age. Vera is preceded in death by her youngest sister, Altermease “Toni” Green, her Stepfather and mother, Earl and Norma Watkins, her brother in-law Robert Bush, her aunts Louise Clee, Gloria Thompson, Naomi Conley, Gertrude Bland and Brenda Thompson, her uncles William Hardaway, Percy Thompson, and Stanley Thompson, and her cousins Barbara Conley, Tyrone Clee, and Melvene Conley. The father of Vera’s son, Raymond, Julius Patterson, also preceded her in death. As our newest heavenly angel rests with our savior, Vera leaves the following people to cherish and honor her in love, life and legacy: one daughter, Theresa Hardaway of Yonkers, NY, one son, Raymond Hardaway-Patterson of Hackensack, NJ, Two sisters, which include Crystal Bush of Burlington, N.C., Yvonne Rawls of Burlington, N.C., three nieces, which include, Felisha DeCastro, Marilyn Rawls, Sarah Rawls, and four great nieces, which include, Brianna Muniz, Ashley Muniz, Arianna Brown and Tamara Hardaway. Ms. Vera also leaves behind 3 nephews, which include, Earl Brown (Ericka), Steven Rawls and Terrell Brown. Numerous cousins including Connee Conley, Yvonne Conley, Florine Conley (Lincoln), Diane Conley, Linette Conley, Nathaniel Clee (Elizabeth), Celestine Harvin (Alvin), Kelly Clee, Jeffrey Thompson, and Kenneth Thompson (Tammy). In addition, Ms. Vera, aka our “Doll” is also leaving behind 66 years of love, life and legacy to several of her colleagues, and friends that have become family, such as Renee Lynch, Kimberly Faulkner, Lazaro Bellamy, Steve Fratello and Marvin Rose. Thank you all for loving our mother. Ecclesiastes 9:7 Go, eat your bread with joy, and drink your wine with a merry heart; for God has already accepted your works.

Vera Mae Hardaway was the first-born daughter, of the four daughters, Norma Watkins gave birth to. She was born in Manhattan, NY on November 13, 1955. March 26, 2022, was the chosen day in which our beloved Vera Mae Hardaway, earned her wings... View Obituary & Service Information

The family of Vera Mae Hardaway created this Life Tributes page to make it easy to share your memories.

Vera Mae Hardaway was the first-born daughter, of the four daughters,...

Send flowers to the Hardaway family.